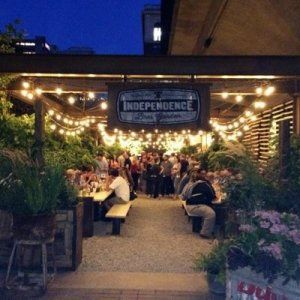 –Nothing celebrates freedom quite like enjoying a cold one outside, and that’s why this beer garden is an American classic. Michael Schulson’s seasonal 22,000-square-foot Old City getaway boasts 50 taps and seven cans, plus a menu of comfort-food bites (spicy shrimp rolls, beer-battered fish and chips and mac and cheese).

Philadelphia is lucky enough to have a casual beer garden within a few steps of one of its most visited attractions. Say hello to Independence Beer Garden, which soft opens for the spring on Friday, April 15 and Saturday, April 16 (and officially opens on Thursday, April 21) with lawn games, beer, food, cocktails and much more. Note that the beer garden will be closed from April 17 through 20 in anticipation of its grand opening on Thursday, April 21 2016