Brunch of Great Food for a Great Cause 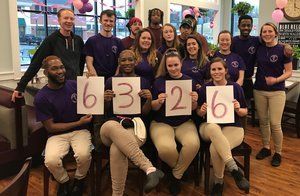 The “Great Food for a Great Cause” is an annual event where Turning Point(https://theturningpoint.biz) generously opens their doors to host the Kortney Rose Foundation's (KRF) fundraiser. What is even more admirable is that along with the donations given by their hungry and charitable patrons, Turning Point donates all the proceeds made on those days to the KRF fundraiser.

“The Turning Point organization has been key to our ability to raise money to find a cure for the number one disease cause of death in children,” said KRF’s Founder and Kortney’s mother, Kristen Gillette. “We are overwhelmed with gratitude from the growing community support for our mission to find better treatments and cures for the more than 3,500 children diagnosed annually with brain/central nervous system tumors.”

According to Kortney Rose Foundation's Founder Kristen Gillette, this year's goal was far exceeded. Turning Point and KRF were able to raise approximately $74,000 this year. Which is phenomenal because the donations accrued are directly funding pediatric brain tumor research being conducted at the Children's Hospital of Philadelphia (CHOP), and the Children's Brain Tumor Tissue Consortium (CBTTC).

Bryanna Roos, who works for KRF cheerfully explained, “It is such a great organization, and it is awesome getting everyone together and involved with raising money for pediatric brain cancer research! So when the people are seated at their table, the servers come over and the people see the purple t-shirts, balloons, information card, and a donation envelope, and the server will tell them about the fundraiser going on. And if they would like to help raise money for pediatric brain cancer research they are more than welcome to add a donation to their receipt, or donate cash or credit.”

And the compassion and generosity of everyone coming in was evident. I watched the servers came to the table every few minutes holding another patron's pink envelope with their donation inside. It is heart-warming to see so many kind-hearted people supporting such a noble cause.

“We are humbled by the generosity of our guests and their philanthropic belief in assisting in finding a cure for pediatric brain cancer. Turning Point and the Kortney Rose Foundation appreciate every dollar given towards this effort,” said Kirk Ruoff, Founder and CEO of Turning Point.

If you missed this year's event and would like to learn more about the Kortney Rose Foundation and wish to contribute in some way, or if you are interested in attending one of the upcoming events, you can visit their site at http://thekortneyrosefoundation.org. And to show your support in the upcoming months, you can “Go Gray In May” during New Jersey's official Brain Tumor Awareness Month.