Wingcraft Kitchen and Beer Bar announced they are launching a specialty pizza menu in collaboration with world-champion pizzaiolo Michele D'Amelio. Located in Atlantic City the restaurant has received several accolades for its burgers including #1 Burger in South Jersey as voted on by AC Weekly. 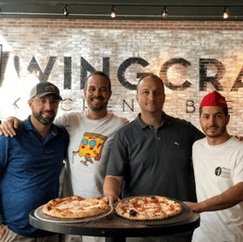 “As with everything Wingcraft does, only the best was good enough when it came to such an important menu shift,” said Wingcraft owner Nick Ballias. “The goal was to create a truly unique pizza that was worth traveling across the country. I traveled the world in search of the best pizza and the experts that created it, visiting Las Vegas, Orlando, Chicago, New York City, and Montreal, to name a few.”

During his travels, Nick met World Champion pizzaiolo Michele D'Amelio, who has been working with Wingcraft owner and Corporate Executive Chef, Michael Balles to bringing the pizza Nick envisioned to life.

The pizza will be made with simple ingredients and stands out from “traditional pizza” typically found in the region, including the hydration rates and fermentation methods used. The restaurant worked on the recipe for weeks to achieve results they believe will wow their guests eager to try the newly launched pizza.