Philadelphia, PA - Angelo’s Pizza of Haddonfield had been opened for just one week with lines out the door in South Philly, was ordered by Philadelphia's Department of Licenses and Inspections to close until further notice. A fire broke out shortly after midnight underneath its primary oven, explained owner Danny DiGiampietro.

The pizza and sandwich shop had just opened its doors in the old Sarcone’s Deli at 936 S. Ninth St. this past week., after Angelo’s Main Street in Haddonfield, N.J., Angelo’s was shut down because of water damage, customers were left hanging.

The extremely popular pizza and sandwich shop had gained quite a following in 2017 and much excitement on social media after announcing they were going to re-open after a year and a half wait in South Philadelphia. 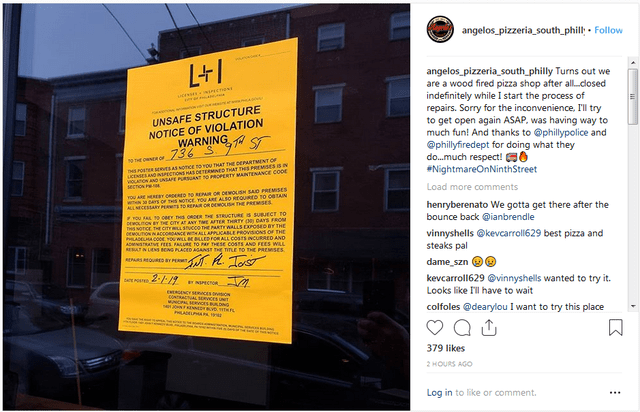 Philadelphia Fire Department needed to cut a portion of the flooring joist to deal with the fire, and the building ended up being unsafe. It's unknown when the establishment will re-open.

During the past week, the shop was packed daily with fans of the old Haddonfield shop seeking out DiGiampietro’s famed pizzas and sandwiches.