- Every two years, The Kimmel Center hosts a 10-day celebration of the Arts, called The Philadelphia International Festival of the Arts (PIFA). The events planned during PIFA brings a variety of talented artists, play-wrights, and theatrical shows, including an awe-inspiring free street fair for residents to enjoy.

According to Jay Wahl, who is the Producing Artistic Director for the Kimmel Center and the Artistic Director for the Philadelphia International Festival of the Arts, it takes two years to plan and prepare for PIFA.  Mr. Wahl has produced all four PIFA events that The Kimmel Center has hosted throughout the years, and he travels the globe to find the artists who will perform during it, including local artists and companies. 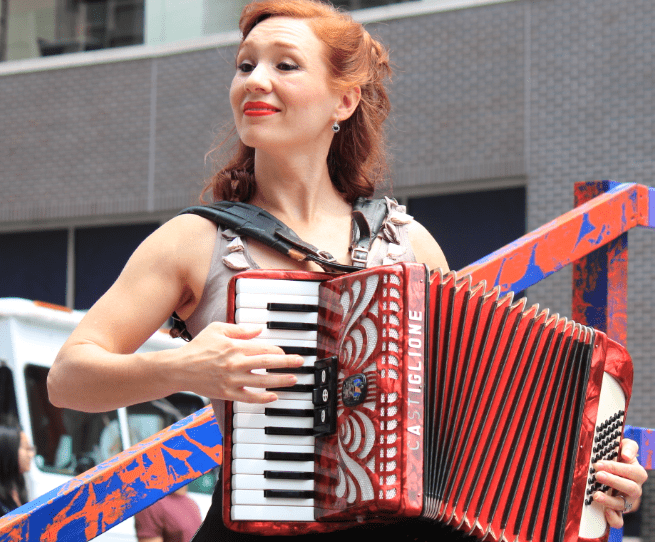 “We think a lot about, ‘How do we collaborate with the whole city?’ Of course the event is for the whole city, as you can see around us. There’s every person imaginable here.  The whole goal of the festival is to build community and bring people together,” said Jay Wahl after being asked how The Kimmel Center chooses who will perform during PIFA.

As he said that, he motioned to the middle of Broad Street in center city off the Avenue of the Arts.  Usually the street is packed with honking cars trying to navigate through Philadelphia. However, on June 10th as you look from Lombard and Broad all the way to Chestnut Street (with Philadelphia’s grandiose City Hall as a backdrop), all you could see was a sea of smiling faces. People were walking on the grass and enjoying the many various activities that The Kimmel Center had prepared for the public to partake of.

Families could come with their children to pet and feed live camels, goats, and calves. Afterwards, they could sit on the planned grassy landscapes in front of the stage and listen as a variety of bands playing different genres of music took their turn on stage, including The Kimmel Center’s own La Noche band on the Pine Street stage, or Temple University Band at the amphitheater on Walnut and Broad.

Aside from the local brick and mortar restaurants and stores located along the blocked off streets on Broad, attendees of the festival were also treated to mobile vendors.  For example, people who wanted to purchase a keepsake had a variety of local artists to choose from, selling hand-made items that they created. Or if you were hungry you could purchase something from a food truck, like Kono Pizza, The Cow and the Curd, or Beast of the Street then sit at a whimsical table which wound its way down the streets.

When the elongated table ended, it met with a Bike Race Sandbox where there was a large collection of stationary bikes in an enormous sandbox. A little further down, children could make paper boats and float them on a river that ended in a waterscape and fountain.

And if you wanted to cross the Paper Boat River and community table, there were bridges made by a local scene shop and painted in bright and bold colors by Mural Arts Organization, according to Mr. Wahl.

“We really believe that we can transform lives daily through the arts, that’s the mission of The Kimmel Center, and we take that very seriously. And try to explode a magical wonderland across the city. I always want Philadelphia to know that we can do anything, and this proves that,” stated Jay Wahl.

Broad Street was transformed into a world of interactive and artistic installations; from activities like Super Slides, a high-rise Obstacle Course, Virtual-Reality Swings, and a Merry-Go-Round to the visually stunning performances like the High-Dive, a group of artists painting huge portraits in the middle of the street. What really stopped all the foot traffic and drew the eye was a zeppelin floating above the crowds with a performance artist attached to it waving her Alexander Calder-like wings.