PhillyBite.com (Oct 2, 2015) -  On October 24, 2015, Philadelphia, will attempt to create the world's largest cheesesteak in the world, by breaking the current world record of 426 feet set in 2011. The event will take place at Lincoln financial field during Philly's first-ever festival honoring the famed sandwich.

The record is currently being held by Tucson, AZ, Frankies South Philly Cheesesteaks and Acacia Real Food & Cocktails combined efforts on April 2011 to create a 426-foot Philly Cheesesteak at theUniversity of Arizona Mall.

Philly will attempt to take back the record with a gigantic 450-foot cheesesteak will be constructed for the 1st annual Philadelphia Cheesesteak Festival, with the gigantic "VISIT PHILADELPHIA World’s Largest Cheesesteak" sandwich Built by Steve’s Steaks and Amoroso’s!

To beat the Tucson record Philly will have to top the 400 lbs of meat, onions, and seasoning were grilled up before placing it on the specially baked 426-foot roll. And finally, 100 lbs for Cheez Whiz was placed on top of the massive sandwich to complete the world record.

- Here in Philly, cheesesteaks are a civic icon, a tourist draw, and a cultural obsession. Often imitated around the world, the cheesesteak is rarely duplicated successfully outside of Philadelphia. Here are a few of the best South Philly cheesesteak locations.

It may be across the street from the oldest cheesesteak joint in town, but Geno’s Steaks is a formidable competitor going roll-for-roll with Pat’s for more than 50 years. The key to success for the 24/7 spot? Quality thinly sliced rib-eye steak for maximum juiciness, the freshest of onions, and house-made bread. 1219 S. 9th Street, (215) 389-0659, genosteaks.com 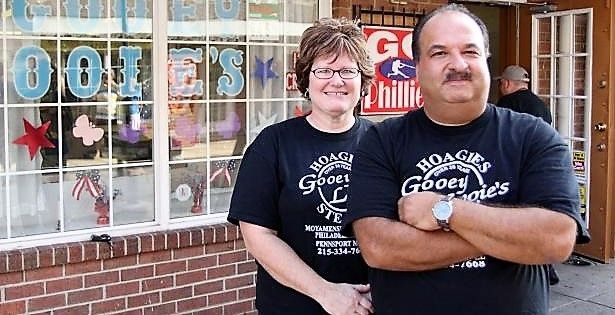 Gooey Looie’s - With a name like Gooey Looie’s, the kitchen isn’t going to skimp on the meat. The Pennsport deli plumps up its sandwiches with a beyond-generous helping of steak and cheese that demands many napkins—and sometimes utensils. 231 McClellan Street, (215) 334-7668, gooeylooies.com

Pat’s King of Steaks - The original home of the cheesesteak, Pat’s King of Steaks has been owned and operated by the Olivieri family for 87 years and counting. A 24-hour shop, Pat’s shuts down for only 48 hours each year: Thanksgiving and Christmas. 1237 E. Passyunk Avenue, (215) 468-1546, patskingofsteaks.com