Philadelphia, PA - will host a parade this Thursday for our 2018 Super Bowl LII Champions! The parade will tentatively start at 11am at Broad and Pattison, heading north to the Philadelphia Museum of Art. Further details will be announced at a Tuesday 9am news conference, location to be determined.

The Eagles Parade will start in South Philly tentatively planed for 11 a.m. at Broad and Pattison, heading towards City Hall and making its way down to the Art Museum, where millions of Eagles fan are expected to gather for presentations on the parkway. 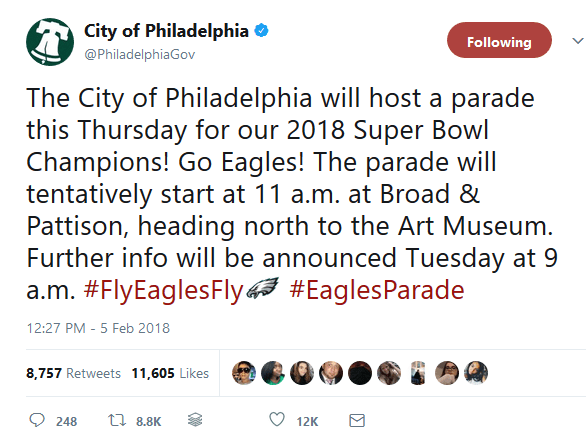 “For so many who have called themselves Eagles fans for a generation, this is the day, the game, the season, and the team we’ve dreamed of. The 2017-18 Philadelphia Eagles are Super Bowl Champions, and they’ve brought tremendous joy to hundreds of thousands throughout the City and region. They consistently wowed us with their dynamic play and relentless pursuit of victory. Their ‘Next Man Up’ mentality when injuries arose was inspiring to anyone who has ever faced a setback, as was their willingness to embrace the role of underdogs. They looked another storied football franchise in the eyes, and never blinked." - Mayor Kenney

The King & Bud Light - Eagles Fans, Get Your Free Beer -  After the Philadelphia Eagles won their first Super Bowl LII in team history. Bud Light stepped forward with a post and ad in the Philadelphia Inquirer promising to hand out FREE Bud Light at 25 bars and taverns along the Eagles parade route on February 8.