-Walking up to the doors of Paddy Whacks off of Welsh Road, I could hear the live music greeting me. Once inside, the venue was jam-packed. This was obviously a popular bar in NE Philly, and judging by the reactions of the crowd, Sláinte was equally as popular. 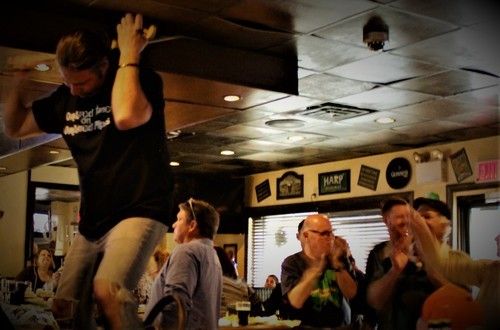 I was lucky enough to enter and catch the last few songs that Slainte was playing, and the enthusiasm and energy which they exuded was contagious. I watched as their fans, who ranged from the very young to the young at heart, came up to dance to the songs which were being played. As the crowd danced and sang along to the lead singer, Frank Daly, who's voice resonated through the venue as he played his guitar. CJ Mills, who sings back-up vocals and is an equally talented musician, joined his fellow band member while playing violin; together the duo excited the room.

Slainte is an offshoot of the Philly favorite Jamison Celtic Rock, which is a five-piece band with additional members John O’Callaghan, Sean Callahan and Dave Lynd that has been rocking the Philly scene for the past decade or so.

During the last song, with the crowd cheering, even these two musicians became more enthusiastic. Jumping on top of the table while playing “The Devil Went Down To Georgia.” I can see why Jamison Celtic Rock and Slainte has dedicated followers, and why the Philadelphia Fleadh, has been so successful for the past 5 years.

CJ Mills who is the organizer of Philadelphia Fleadh explained, “There will be 13 bands playing that day, as well as the Feis at the Fleadh, an Irish Dance competition hosted by Celtic Flame School of Irish Dance, Irish dance performances and trad sessions and workshops for musicians.  There will be food and souvenir vendors, and a kids zone complete with bounce house, face painting and balloon animals. There are also 2 all-band jams, where everyone who is playing at the festival can go on-stage if they want to, and the musicians will play the same song together.”

If you want to bring your family out, or to have a fun time with a group of friends, you can purchase tickets Here. And to let you know for planning purposes, there is free parking at The Philadelphia Armory. Or if you want to go a little later, Paddy Whacks will have transportation from their parking lot to and from the event.

“Paddy Wacks is a sponsor and where the official after-party is, which runs from 9:30pm to the end of the night. Bushmills Irish Whiskey is also a sponsor, so there will be Bushmills specials at Paddywhacks and they will also have a bus from 2:30pm to 9:30pm every hour on the hour running back and forth from here and the Fleadh. So you can park at Paddywhacks, take the bus to the Fleadh and then come back here for the after-party,” 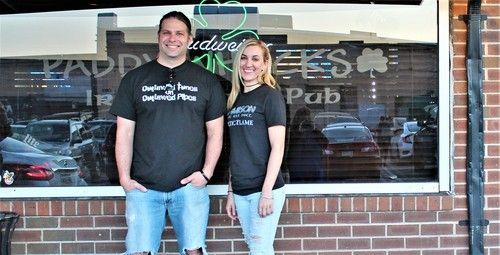 If a day of enjoying live music and performances sounds like something you would like to do, it will be equally rewarding to know that you're doing a good deed for the day. Your attendance at this event will help a young student.

“There's a scholarship that I run called the Ryan Wilson Memorial OTN Scholarship in honor of a young man who unfortunately lost his life from suicide. I work in Bensalem High School, and we give away a 500 dollar scholarship every year, and the scholarship is funded through these events. So a portion of the proceeds goes to the scholarship,” explained Mills.