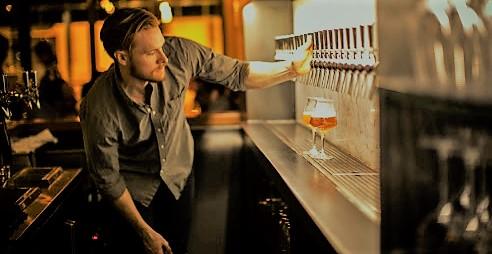 Philadelphia, PA -  Tria Taproom is the ultimate upscale beer bar. Owners Jon Myerow and Michael McCaulley took the word “taproom” literally and built a bar equipped to serve 24 draft beers, 12 draft wines, and 2 draft ciders and 2 sodas. Even hardcore beer geeks will likely find brews they’ve never seen anywhere else. You won’t find a bottle of beer in the whole place. When entering diners are even given an iPad on which to view the daily selection of beverages on tap. 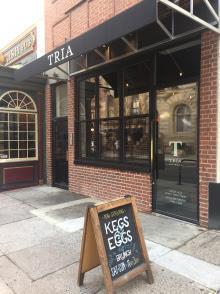 Since opening their first wine, cheese and beer cafe in 2004, Tria has consistently earned critical acclaim and amassed a wealth of loyal fans. Tria Taproom opened in 2013 and was nominated for a James Beard Award for “Outstanding Restaurant Design (75 Seats and Under)” in 2014. Wine Director Michael McCaulley has been a semifinalist for his outstanding wine program four times.

Last month, Tria Taproom started offering select beer flights. Look for rotating options each month. And as much as we love a good drink, we couldn’t come here and not try the food. The menu can be easily be described as simply good bar food. They’ve got a wood fired-grill which they use to make their flatbreads, salads, sandwiches, burgers, and wings. All the food from Chef Jared Cannon pairs perfectly with beer. Oh and how could we forget to mention- fried cheese curds!

If you’re stopping by during the week, you should know that Tria Taproom is best known for their Beer Burger with Chimay cheese sauce, beer pickles and beer-naise sauce. They’re also serving up some unique wings you won’t find anywhere else, these Wings are coated in green chile sauce, then sprinkled with gorgonzola, and celery. 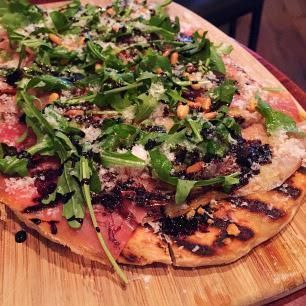 Knowing about their wood-fired grill, we couldn’t resist trying the Parma Flatbread with Prosciutto di parma, fig jam, gorgonzola, pine nuts, arugula, and parmigiano-reggiano. This was easily one of the bigger flatbreads we’ve been served in a restaurant, most definitely entree-sized. We also enjoyed the Grilled Chicken Sandwich with smoked bacon, avocado, and roasted tomato-guajillo mayo. This sandwich was served with a side salad, but if you’re wondering- yes Tria Taproom has “Fries” which are actually smashed fingerlings covered in creamy taleggio fonduta.

Looking for a sweet way to warm up? This January they revealed the Tria-Style Hot Cocoa. This drink is most definitely an adult beverage, the cocoa is house made from scratch and “blended” with a bold smooth malbec and served with tiny marshmallows. Yes, you heard me right-it’s hot cocoa made with red wine. 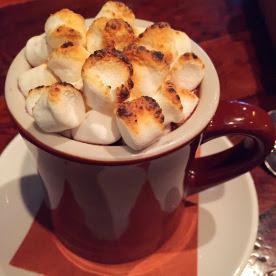 Tria Taproom serves lunch and dinner 7 days a week beginning at 12 pm, and they also offer weekend brunch on Saturdays and Sundays beginning at 11 am! Benedict lovers, rejoice they’re serving up some awesome brunch fare. Tria Taproom is quite literally the definition of “kegs and eggs”. Diners enjoy beer-based brunch cocktails, or sipping draft beer or wine.

We started with the Lemon-Ale made with Pizza Bor Murren River mixed with San Pellegrino Limonata. As big fans of Mimosas and Allagash White we also loved the The Whetted Orange, which mixes the beer (instead of champagne) with orange juice. If you’re looking for something a bit lighter why not try the Saison-Battered Mahi Tacos with cabbage, pico de gallo and avocado cream or Spinach Apple Salad with Allagash cranberries, fried goat cheese and honey-cider vinaigrette.

Brunch lovers will enjoy the unique House-Made Duck Scrapple with poached eggs, beer-naise and grilled baguette or the new Stout French Toast with strawberry coulis, sweet cream and maple syrup. We were totally in love with the large portion of Eggs Benedict with Daisyfield smoked ham, and beer-naise on a Portugese muffic with crispy potatoes and the Breakfast Flatbread topped with potatoes, gorgonzola, smoked mozzarella, bacon, scallion, scrambled eggs, and scallions. 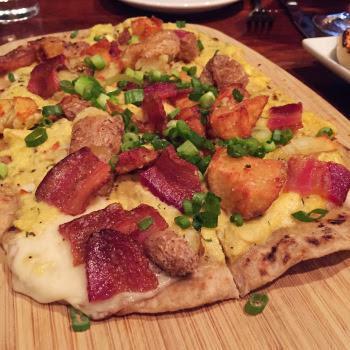 Stop by Monday through Thursday 4-7 pm to enjoy their 100-Mile Happy Hour, which highlights beverages produced within 100 miles of Philadelphia! The 40 draft lines offered here make them one of the city’s best places to “think outside the bottle.”And for those time you can’t get your butt off the couch- they offer delivery via Caviar!

On Tuesday, April 4 2017, Tria Taproom will launch Taproom Cocktails: four custom-blended cocktails, made from artisanal spirits and fresh juices, on draft. It’s the first time that any Tria property has offered liquor beyond wine and beer, and to celebrate, they will host a fun Launch Party, featuring a live DJ and friendly pricing on all four drinks, from 5 p.m. until 8 p.m.

Taproom Cocktails, like all of Tria’s offerings, will be guided by their company-wide mission of serving exceptionally high-quality products in a friendly, educational, unpretentious setting. Working closely with mixologist Marshall Altier of New York’s Spirit House Consultants, the Tria Taproom team designed these four cocktail recipes, based on classic tipples and made from fine spirits and fresh juices. After a precise adjustment to their draft lines, overseen by Anton Baranenko of Draft Choice, the four cocktails were kegged and will be poured for the first time this spring. Baranenko, who installed Taproom’s draft lines ahead of their 2013 opening, carefully calibrated the CO2 levels to match each drink’s ingredients: the texture of a shaken drink for one, for example, and a stirred drink for another:

Taproom Cocktails range in price from $11 to $12; during the Draft Launch, they will all be available for $10 each throughout the evening. Representatives from the local distilleries featured on the menu will be on hand to celebrate, and a DJ will soundtrack the evening with classic rock and funk, lending a festive atmosphere to the first official taste of these fun new drinks.