Philly All About Beer 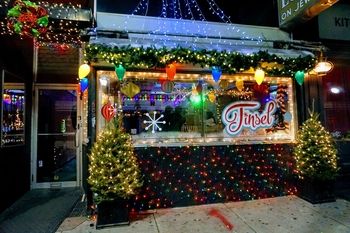 Tinsel Christmas Cocktail BarTeddy Sourias and Craft Concepts Group announce the grand opening of Tinsel Christmas Pop-up Bar at 116 S. 12th Street, Philadelphia. Midtown Village will get a little extra Christmas cheer with this new holiday-themed cocktail concept that will take over once more the space formerly occupied by Simpson's Jewelry, and it will be open during the 2019 holiday season.

The former jewelry store moved out of the space less than a week ago and the mad elves from BRU Craft & Wurst, Cinder, U-Bahn, Uptown Beer Garden and Finn McCool's Ale House have been working night and day to get the new concept ready for its debut this weekend.

"We have tons of new surprises to share for the new season, including giant custom four foot tall chandeliers made from packages, icecles and ornaments, a nine-foot tall Gingerbread house, a Santa's throne perfect for selfies, and music currated with help from Mr. Christmas XPN's Robert Drake." - 2018 Season

"We are excited to continue the expansion of Craft Concepts Group in Midtown Village," said Sourias. "We purchased the 116 S. 12th Street building for future development and we wanted to keep the space activated. Our managers and teams from our other bars and restaurants came up with the idea to do something in the winter when we have downtime from Uptown Beer Garden. Tinsel lets us have some mid-winter fun outside of beer garden season - and lets my team showcase their creative abilities in customized this unique jewelry store setting. The space also gives us the opportunity to definitely expand out of our comfort zone and showcase our fun and super playful side. Come join us for some Christmas cheer!"

Tinsel will offer a full selection of liquor and spirits, Christmas cocktails and all-speciality Christmas beer drafts. Drafts will focus on American and Belgium holiday specialty ales and beers throughout the season

The space features three rooms decked out from floor to ceiling in the most festive decorations, wrapping and holiday lights - including a custom Krampus mural, a toy train in the front window, a glowing fireplace art installation over the former diamond safe, a festive holiday tree, and even Santa Claus himself. The 1,100+ square foot space will include community high top custom wooden counters, a 25 foot bar along the former jewelry counter and 12 bar stools at the main bar.