The Road to Becoming a Philly Foodie and Food Blogger (Photos: Just Grubbin)

Philadelphia, PA - My Road to Becoming a Philly Foodie: What’s Been Poppin’ Vol.1: I’ve always had a strong passion for food. I mean the kind of passion that when my friends plan a night out in Philly, they start listing different bars and clubs, and my immediate thoughts are “hmmm what food is in that area?”.

So after a text conversation with one of my good friend’s in May about breakfast skillets, a light bulb went off in my head and I started JustGrubbin, a nationwide food blog, podcast, and web series, that is based out of the Philadelphia area. I love food so why not share my obsession with the world. This new delicious venture of mine has led me to attending some awesome events and meeting some fantastic people but most importantly trying some mouthwatering Philadelphia cuisine. We still have a month left of summer but here’s some of the best food I’ve tried so far and some awesome events that we have attended: 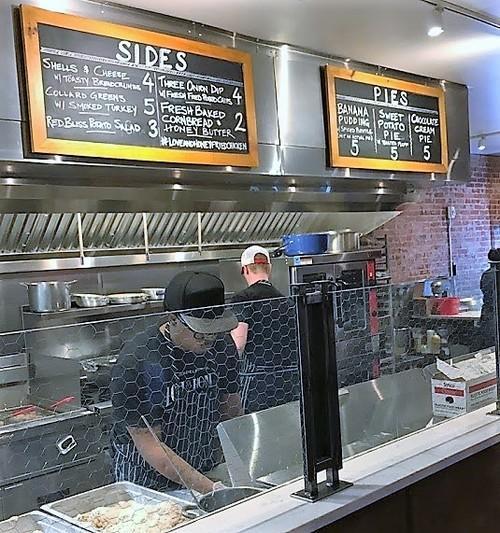 Love & Honey Fried Chicken - One of the best/worst things about getting into the whole foodie scene is managing the social media accounts. It’s the best because I get introduced to all sorts of new foods and restaurants, it’s terrible because when you’re hungry your whole social media timeline is filled with all sorts of new foods and restaurants. Oh the irony, but one of the great things I discovered on Instagram was Love & Honey Fried Chicken in Northern Liberties. After reading a couple of great reviews I called up my boy Big Al and off we went to try some chicken. The first thing we noticed was the line, people were packed into the restaurant on a Friday night waiting patiently for their meals.

The second thing we noticed was the smell, it was a heavenly aroma permeating around the whole block. The last thing we noticed was that the owners, Todd and Laura Lyons were preparing and cooking the chicken with their staff and not just delegating. Right then and there, we knew the food was going to be lit. Boy oh boy were our assumptions proved correct. After introducing ourselves to Todd and Laura (the coolest most down to earth people you’ll ever meet) we grabbed our food and took it outside.

What happened after that was nothing short of barbarity, the big fella and I decided to dip into our bag and try a piece of chicken each right in the parking lot. This “sampling” turned into us devouring basically every part of our meal and repeating over and over again to ourselves “DAMN this is some good chicken....... I just can’t get over how good this is”. It was so good that Big Al couldn’t contain his joy and went immediately back inside to rain adulation upon the new culinary power couple. All jokes aside this is one of the best things that I’ve tried this summer, so I highly recommend you giving them a shot if you’re a fried chicken lover like myself. They even got the Quest Love stamp of approval when he was in town for the Roots Picnic.

Rigatoni’s Mobile Crab Cakes – If you love crab cakes you absolutely need to try Rigatonis. I discovered them on one of my first foodie excursions when I attended the Saunders Park Greene Food Truck Festival. 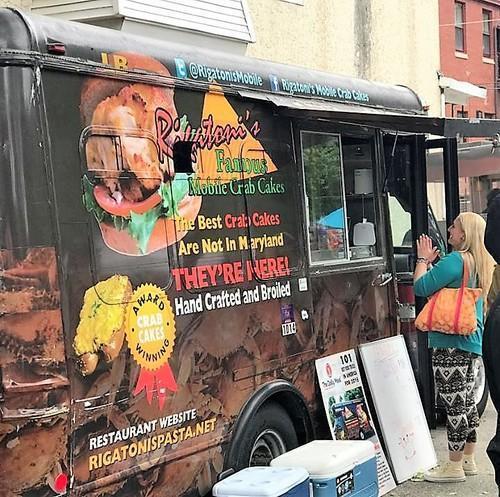 They had the longest line out of all the trucks so I decided to they would be my last stop to properly maximize my time. I feel like the quote “Save the best for last” doesn’t even do justification in this scenario. I’m a huge fan of crab cakes but they can definitely be hit or miss. Well folks this was like a huge hit from BDawk on a helpless wide receiver who had the unfortunate assignment of crossing his path. I’ve tried numerous crab cakes in my 32 years on this earth and this was the best one I’ve ever tried. The quote on the side of their truck say's "The Best Crab Cakes are not in Maryland, THEY’RE HERE”. I definitely was skeptical reading such a bold proclamation.

After one bite into this delicious jumbo lump masterpiece I realized there was a reason they were ranked the #19 Best Food Truck in America for 2016 by The Daily Meal. It was so fantastic and perfectly prepared that my first reaction was to literally dance. It was huge and the crabmeat was succulent. Even the bun was a perfect complement to this magical sandwich. In fact, it was so good that one of the main reasons I attended the Philadelphia Zoo Summer Ale Festival this summer was because I knew Rigatoni's was going to be one of the food trucks there. While there I had a chance to chop it up with my dude George and tell him how magnificent his creation was. Ever since having this I crave it at least once a week, there’s nothing that compares to them in the area. 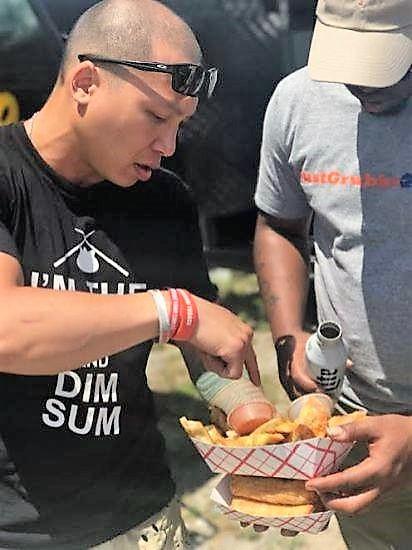 Dump-N-Roll – DumpNRoll is a food truck owned and operated by Philadelphia’s own, the electric Peter Tong. They specialize in dumplings, just like the name implies. Peter is one of those people that just ooze positive energy and when you meet him you have no choice but to reciprocate the same vibe.

I’ve had DumpNRoll multiple times now at multiple food truck festivals and every time it seems like the food gets better than I remembered from before. When you come across their truck you get the sense that this isn’t work for them, this is something they legitimately enjoy doing. Their most popular item on the menu is called the "Far West", It’s a tempura turkey bacon cheeseburger wonton.

EVERYTHING is sensational from the veggie dumpling to the crab ragoon to the white garlic truffle fries, everything is cooked to perfection and will have your mouthwatering after every bite.

They were voted the best food truck by Taste of Success in 2016 and I'm definitely not going to argue with that. Peter's larger than life personality, his entertaining crew (you can often find them dancing and jamming while serving up grub), and with his unique takes on Asian cuisine equal a food truck experience like no other. I would unquestionably recommend anyone reading this to stop when you see the DumpNRoll truck and give it a go.

Terakawa Ramen- If you search their name on Yelp you’ll find that Terakawa is one of the top ranked if not THE top ranked ramen places in Philadelphia. I came here to start a Sunday funday in the city with a few members of Team Grub. It was Sunday, as I previously stated and it was around noon yet as soon as we approached the quaint Chinatown restaurant it was filled at capacity with a 30-minute wait for table seating. 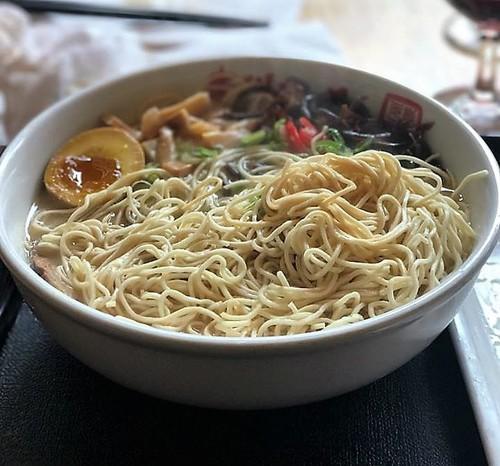 We weren’t expecting this at all, because of the day of the week and time, but we also took it as a sign that we had chosen the right ramen establishment to try. They absolutely lived up to their high Yelp rating. Me and the fellas got the shrimp tempura shu mai, chicken buns, and the pork buns as the starters to our feast. Let me preface this by informing you that I am a shrimp shu mai fanatic, I have never tasted one prepared the way Terakawa does theirs. Usually shrimp shu mai is steamed so I was already intrigued when I saw tempura in the name and it did not disappoint. It may only be an appetizer but it's one of the most popular items on the menu. It was so fantastic that I probably could have just had three orders of this and called it a day.

The pork buns and chicken buns were similar in ingredients, they both came with slow roasted pork or pan seared chicken, a choice of soft or crispy rolls (we chose the former), some butter leaf lettuce, tomato and spicy mayo.

For my main course I ordered the Terakawa Signature Ramen, while consuming this I lost all ideas of eating like a normal member of society and basically inhaled my entire bowl. It was so delicious and filled with flavor that I lost all awareness of my surroundings because I entered a brothy blissful state.

When I finally came back to Earth, I wiped my chin and asked my fellow Grubbers how they enjoyed their meals, they had nothing but praise also. In other words, it was definitely Lit. I will be back here to try their other offerings and as soon as I do I’ll make sure to report back.

Art-B-QUE 2- I found this event while I was perusing the Philly Grub blog and I’m happy I did. It was held at MilkBoy on Chestnut. It gives bar goers an opportunity to indulge in some BBQ and check out some Art from some of Philly’s most talented local artists. Your telling me I get to peep fresh and unique art while sampling BBQ from a handful of different chefs?! I knew immediately this was going to be my type of affair. 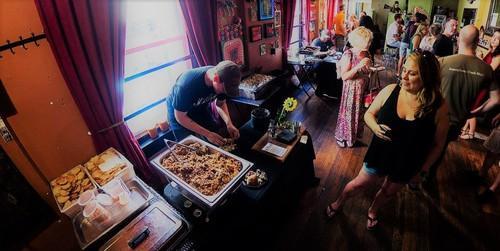 Fellow foodie and JG contributor Mo Hall described the event best "This was a clever mix of artisan crafted BBQ and eclectic pieces of art from local independent artists. Mix all of that together and you have an evening of aesthetically perfect ambiance of music (Thee Idea Men, fucking killed it), eye candy, and a taste from some of the best BBQ spots in the City." 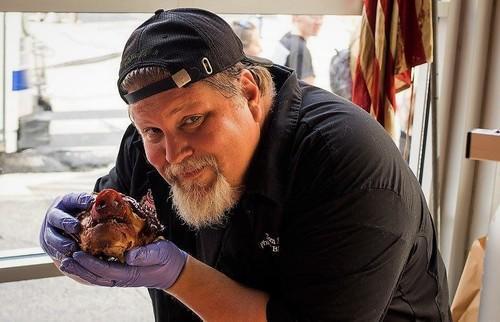 We had the pleasure of meeting some awesome people including Tom Bera from Philly Blind Pig. Tom introduced us to his "Pigstrami" sandwich and I'm just happy we arrived when we did because by the time we made it to Milkboy he was almost all out of this exquisite pork cuisine. It was a corned pig Rueben sandwich, Corned Pig! The meat was brined generously and smoked then served with kraut, Russian dressing, and an extremely delicious roll.

We also had the honor of meeting Chris and Tyler, a couple of chefs from Milkboy Chestnut. They made some amazingly delicious, tender, smoke filled, tangy sauce drippin’, bomb ass ribs and the potato salad was nothing short of sensational. We finished this event off with just the perfect pulled pork sandwich topped with homemade slaw from Milkboy South St. You can bet your ass we'll be in attendance for Art-B-Que's until they don't throw them anymore. 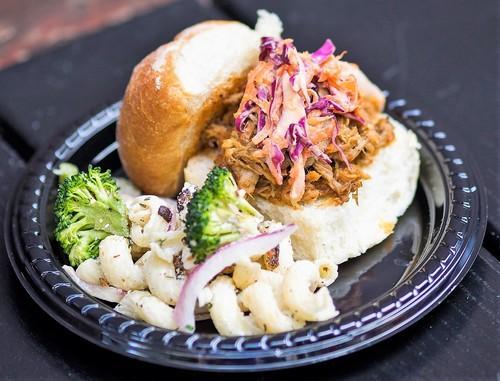 I really hope everyone enjoyed reading this as much as I enjoyed writing it, entering the foodie scene was absolutely one of the better decisions I’ve made in my 32 years on this earth. With so many different events coming up this is only my part one of me documenting my journey. I plan on following this article up with more delectable items, events, and restaurants that I’ve discovered and experienced so that anyone reading this can experience the same culinary euphoria as I have. ‘Til next time my hungry friends!