Philadelphia, PA - Leon Lucas in 1943 purchased a bar and named it Donkey's Place, immediately after his stint as an Olympic light-heavyweight boxer ended, the fighter came straight back to Camden, NJ and started offering up his unique fried steak-and-onion sandwiches on a well-seasoned grill.

Leon's nickname as a boxer was "Donkey" due to his punch possessing the power of a mule’s kick. So the name remained, and donkeys was born. Moreover, the bar has continued to reside with the Lucas family ever since. 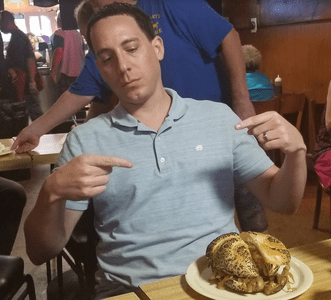 Donkey's CheesesteaksDonkeys was a hit from its beginnings; However, when influential chef, writer, and TV Star Anthony Bourdain popped in for a bite to eat in 2015. He proclaimed the unique sandwich to be sublime, and things took off. He even mentioned that the cheesesteak at Donkeys might rival the steaks in Philly, well not really but it could take the title on the Jersey side. The bar was also additionally recently featured on the hit TV sitcom “The Goldberg's.”

Donkey's menu is pretty straightforward. A cheesesteak will cost you $9, but it's a little extra if you desire double meat, extra onions or perhaps double cheese. A large side of french fries will set you back $4.

So what makes it unique? Donkeys makes its cheesesteaks just slightly different, from across the bridge. As an alternative to the conventional long Philly roll, Donkeys makes use of a poppy seed kaiser roll. The Kaiser rolls are much smaller compared to your typical cheesesteak rolls, and yet they are encompassed with plenty of beef, producing in a meatier experience.

With cooked layered cheesy meat topped with ketchup, crushed cherry peppers and a pile of sweet fried onions. The roll is soft and also soaks up almost all of the juices which drip from the meat without getting overly soggy. However, what makes a Donkey’s cheesesteak is the thick-cut, well-grilled onions.

The bar its self is a collection of stuff distributed all about the place most notably Donkey’s old boxing gloves. The dining area itself is an extraordinarily vibrant and comfy, and truth be told there is absolutely nothing terrifying about a visit, the area is all right, during daytime hours and there’s is even a small parking lot. However, if your still unsure they also have Donkey’s Place Two in Medford, NJ.