West Berlin, NJ - On May 19th seven local Shoprite stores, all owned by the Zallie family, honored USA military veterans at a luncheon. Held each year in May, the 7th annual luncheon honored six veterans at each of the Zallies Supermarkets, Inc locations. However, any active or retired service member was welcomed to attend the event.

In fact, I watched as Guiliana Zallie graciously invited Shoprite customers to join when they stated that they were veterans, or a family member of someone who served. That is not only admirable, it is appropriate because this year’s luncheon occurred on Armed Forces Day—a holiday which encourages people to thank military members for their patriotic service in support of the country.

The commencement began with Winslow Township Ambassador Troop 30910, and Brownie Troop 30725 gifting their beloved cookies to the veterans as they arrived. Soon afterwards we stood to say the pledge of allegiance and salute the American Flag, which had its own history; it was flown over a United States Base located in Afghanistan many years ago.

After the opening ceremonies were completed, each veteran was introduced and invited to say something during the event. The honored guests at Zallie’s Shoprite in West Berlin, NJ this year were:

George Bethel, who was one of the honorees, mirrored the appreciation heard from all of the men being honored. [sic] “I just want to thank the store and the Zallie family for having us out. On behalf of VFW Post 303 and Sergeant Ron Wright, and as you know the Mayor of Winslow Township supports us very well. I would just like to say thank you for having us out, and I appreciate you having us. It means a lot,” stated Mr. Bethel.

At the conclusion of the buffet, Guilliana Zallie and Phyllis Magazzu (Mayor of Berlin Township) thanked the veterans and their families for attending the event. Additionally, Ms. Zallie thanked the Shoprite catering staff who provided and served the food and beverages for the buffet lunch.

Afterwards, the six honorees were given a $200 bank gift card, a beautiful floral arrangement and gourmet fruit and cheese basket (made in-store by their respective departments), along with a Swarovski ornament bearing the inscription, “Home of the Free, Because of the Brave”. 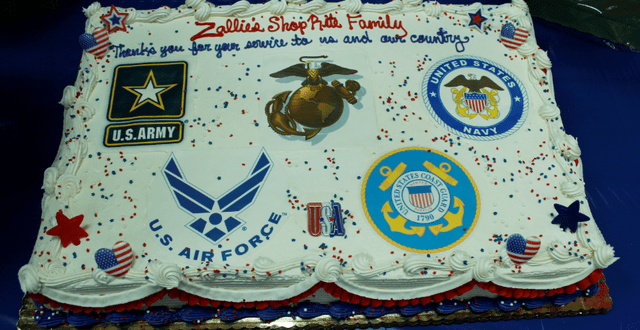 Appreciation for our military by the Zallie family didn’t end after the luncheon. They are giving a special discount for veterans and active military members at participating Shoprite stores.

“These brave veterans are our neighbors, friends and role models and we are humbled to once again host six veterans and their families at each of our seven stores. These special lunches give us a moment to pause and help recognize the enormous sacrifices veterans have made for our freedom,” said Bruce Zallie. “In addition to this year’s luncheon, all Zallie Supermarkets, Inc. ShopRite stores will offer active and retired military personnel, with proof of ID, a 5 percent discount on in-store purchases made Saturday, May 19, as well as every Monday beginning May 21*.”

*The 5 percent military discount will be available Saturday, May 19th as well as every Monday beginning May, 21st . Some restrictions apply. Please see individual stores for details.