Philadelphia, Pa - October 23rd marked the official launch the OAKHEART Genuine Spiced Rum consumer experiential campaign at XFINITY Live! in Philadelphia for the Eagles vs. Vikings game. To engage with consumers and local media onsite, OAKHEART enlisted legendary former Philadelphia Eagles Running Back, Brian Westbrook, to lead the charge and encourage fans to get involved with “Raising the Flag” and “Taking the Oakth.” 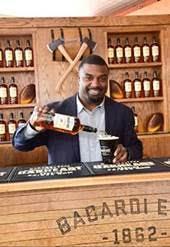 The Philadelphia activation kicks off a series of consumer events in key markets for OAKHEART, focused on professional sporting events. Groups of friends were asked to step up together to raise a flag mounted in a giant American oak barrel and take the “Oakth Challenge.” If they succeed they were then invited to “Take the Oakth,” initiating the team into the OAKHEART brotherhood by carving their name into a giant OAKHEART barrel, which will travel across the country making stops at each local market activation.

The morning began at 9AM with Brian Westbrook inside the NBC Sports Arena at XFINITY Live! with a meet & greet for fans and the legendary football player. The sectioned off VIP area was adorned with OAKHEART branded American Oak Barrel tables along with Eagles colored balloons that were provided by the venue. Fans lined up around the space to get their photograph taken with Brian Westbrook while attendees learned about the “Oakth Challenge” opportunity that kicked off at the venue later in the morning.

Additionally, Brian Westbrook broadcast his radio show, 97.5 The Fanatic, live from the “Oakth Challenge” activation. Along with fellow radio personalities, Brian Westbrook promoted the activation throughout their live pre-game broadcast that took place from 10am – 1pm before the game officially kicked-off.

Throughout the activation Brian Westbrook was instrumental in fan participation and drawing consumers to the “Oakth Challenge” patio location at 1100 Social inside XFINITY Live! He posed with consumers for photos, joined in on raising the flag, taking the “Oakth” and even made a couple Oak & Cola’s himself behind the bar. Brian Westbrook additionally signed two OAKHEART bottles for fan giveaways as well as an OAKHEART Barrel cooler and Football for the brand.