- The Liberty Bell which once hung above the 700 Level seats at Veterans Stadium, has now returned to the realm of Philadelphia baseball, after 15 years the bell has found a new home at the Phillies new stadium Citizens Bank Park.

The Philadelphia Phillies announced with a Twitter post that the bell had been installed right outside of Citizens Bank Park and precisely 15 years to the day of the Vets implosion, as a homage to the teams past. Around 19 foot tall, the bell weighs in at a little more than 5,000 lbs along with a little over 300 electric light bulbs. 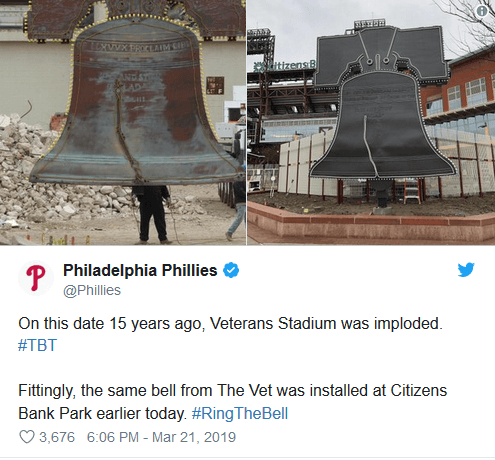 The return of the Liberty Bell's also comes with news of a brand-new beer garden Pass and Stow, opening up this season and taking the place of McFadden's close to the Third Base Plaza.

The beer garden and the bell's homecoming to South Philly is going to be on full display and open during the Phillies home opener on March 28.