- Kollectico "BobbleBoss" unveiled its attention-catching brand-new Philadelphia Flyers mascot "Gritty" bobblehead toy available in the market for pre-order. It's the very first bobblehead for the new Philadelphia Flyers "Gritty" and the clubs first mascot in 42 years. The Flyers announced Gritty this last week to a whirlwind of fan responses both favorable and unfavorable. 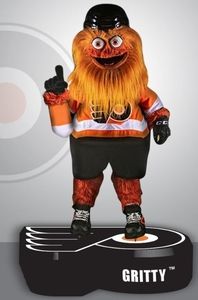 Gritty will be part of the 30 NHL mascots collection released by Kollectico and includes every single NHL team except for the New York Rangers which are nowadays the NHL's only NHL team lacking an official mascot.

The limited edition Gritty bobbles are 100% hand-sculpted, hand-painted as well as distinctively numbered out to 2,019, the season when they are going to ship. The bobbleheads arrive in a collector's package and will cost $29.99 in addition to shipping costs. To get your pre-order go to the website www.BobbleBoss.com.

BobbleBoss is a merchandising website that in addition to NHL mascots, mainly provides customers the ability to "bobble themselves" in NHL uniforms but additionally retails bobbleheads showcasing licenses such as the Grateful Dead, Discovery Channel, the Uncle Drew film, Bigfoot Trucks, PBR, Naked Cowboy as well as assorted political figures including President Donald Trump and Hillary Clinton.