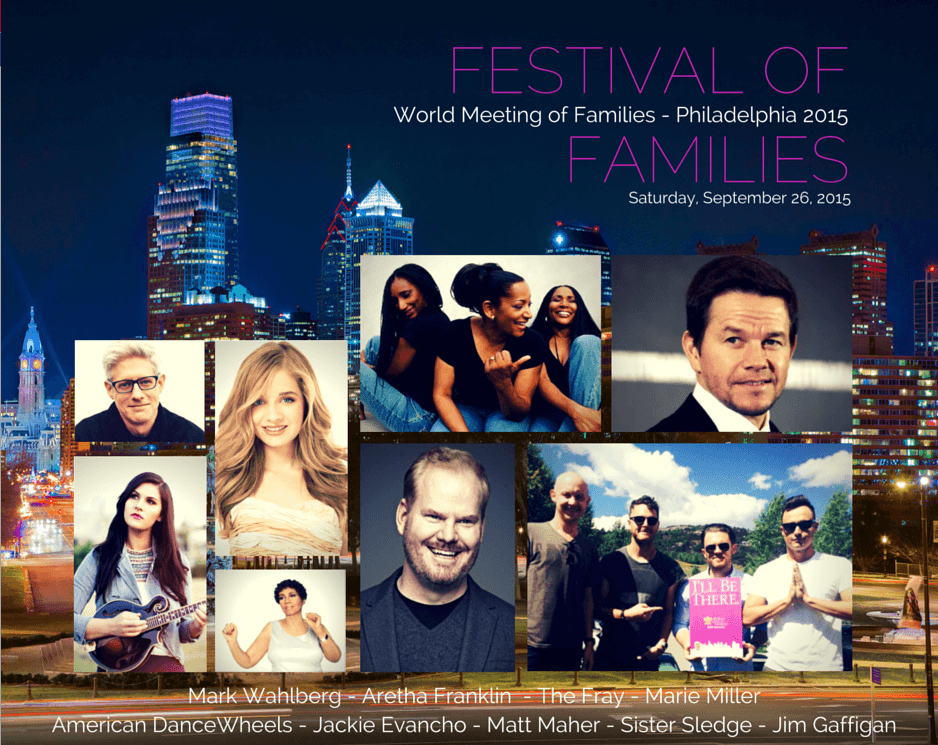 The Festival of Families, held on Saturday, September 26, 2015, is an international celebration of family, community, and faith. Everyone is invited to join in this joyful, global celebration of support and love. During this event, high-level performers, both music and visual, will entertain and educate participants from around the world.

The culmination of the Festival will be a nationally broadcast main stage program of music and spectacular visual arts performances by world renowned artists. Pope Francis will celebrate with us during this time, both to enjoy the show and to listen to six families from different continents briefly describe their joys and challenges. The Holy Father will respond with compassion and words of wisdom for all of us, speaking to those present at the event (more than a million) as well as the additional millions participating through remote viewing. In addition to the main stage, there will be a second stage and exhibits. The second, smaller stage will feature performances throughout the day by many cultural groups, educational institutions, and spiritual organizations.

Mark Robert Michael Wahlberg is an Oscar nominated actor, film and television producer, and philanthropist. Wahlberg established the Mark Wahlberg Youth Foundation with his brother James Wahlberg in May 2001, for the purpose of raising and distributing funds to youth service and enrichment programs specifically for at risk inner city youth. Built off Mark’s belief that “it’s our turn to help,” the Foundation funds the same types of programs that helped Mark Wahlberg overcome challenges during his youth. The Foundation aspires to reach those children whose dreams and passions are limited due to financial circumstances and provide them with opportunities that allow them to see the value in their education and planning for their future.

She is both a 20th and 21st century musical and cultural icon known the world over simply by her first name: Aretha. The reigning and undisputed “Queen Of Soul” has created an amazing legacy that spans an incredible six decades, from her first recording as a teenage gospel star, to her current RCA Records release, ARETHA FRANKLIN SINGS THE GREAT DIVA CLASSICS.

The recipient of the U.S.A.’s highest civilian honor, The Presidential Medal Of Freedom, an eighteen (and counting) Grammy Award winner – the most recent of which was for Best Gospel Performance for “Never Gonna Break My Faith” with Mary J. Blige in 2008 – a Grammy Lifetime Achievement and Grammy Living Legend awardee, Aretha Franklin’s powerful, distinctive gospel-honed vocal style has influenced countless singers across multi-generations, justifiably earning her Rolling Stone magazine’s No. 1 placing on the list of “The Greatest Singers Of All Time.”

An American rock band from Denver, Colorado, The Fray formed in 2002 by schoolmates Isaac Slade and Joe King. They achieved success with the release of their debut album, How to Save a Life in 2005, which was certified double platinum by the RIAA and platinum in Australia, Canada, New Zealand and the UK. The Fray achieved national success with their first single, “Over My Head (Cable Car)”, which became a top ten hit in the United States. The release of their second single, “How to Save a Life”, brought the band worldwide fame. The song charted in the top three of the Billboard Hot 100 and was a top 5 single in Australia, Canada, Ireland, Italy, Spain, Sweden, and the United Kingdom.

The group’s self-titled, second album, released in 2009, debuted at number-one on the Billboard charts and was certified gold in the United States, Australia and Canada. It was also nominated for a Grammy Award for Best Pop Vocal Album in 2010. The Fray was ranked No. 84 on Billboard??’?s “Artists of the Decade” list. Their third album Scars & Stories, released in 2012, was at number four on the Billboard 200. The band’s fourth and latest album, Helios, was released in February 2014.

Marie Miller is a Curb records artist triple threat: singer, songwriter and instrumentalist. Signed to the label since 2005, Miller’s original songs “You’re Not Alone,”“6’2” and “Fall Alone” resonate with listeners in every format from Triple A, Americana, front porch folk to nuegrass to country and classic pop. Growing up in the Shenandoah Valley area of Virginia, the third of ten children, Miller began singing at the age of seven. At twelve she joined her family band, playing festivals and churches with her sister Justina.

In 2005 Miller signed a recording contract and publishing deal with Curb Records. Since that time she has released two EP’s, Marie Miller (2006) and You’re Not Alone (2013), toured the country, and risen significantly in radio charts. Miller’s 2013 single “You’re Not Alone” charted at #1 on Billboard Christian Hot AC/CHR Charts with the music video premiering on VH1 and CMT. The single also reached 115,000 downloads on Amazon’s Rising Star Program. Miller’s current single “6’2” charted at #26 on Billboard AC and was featured on ABC’s Dancing With the Stars in May 2014.

James “Jim” Christopher Gaffigan is an American stand-up comedian, actor, voice-over artist, and author. He is best known for those self-mocking food jokes and for his gentle observations about parenting, the basis of his successful memoirs Dad Is Fat and Food: A Love Story. Gaffigan is father of five and also a practicing Catholic who speaks about his faith with unusual openness. In his stand-up, he incorporates and often subverts the tropes and traditions of “Christian comedy.” And through his TV Land sitcom, which made its debut this summer, it’s fair to say Gaffigan has cemented his status as America’s top Christian comedian.

He collaborates extensively with his wife, Jeannie Gaffigan, and together they have five children. To stay connected to his family, he tries to maintain bedtime rituals while working in the city; when on tour, he takes his family with him.

Jacqueline Marie “Jackie” Evancho is an American classical crossover singer who has gained widespread acclaim at an early age. Since 2009, Jackie has issued an EP and five albums, including a platinum and gold album and three Billboard 200 top 10 debuts. In 2010, Jackie’s popularity grew wider with her performances in the fifth season of the America’s Got Talent competition, where she finished in second place at the young age of 10.

In 2010, Jackie was named the best-selling debut artist of 2010, the youngest top-10 debut artist in US history and the youngest solo artist ever to go platinum in the US. In June 2011, her first full-length major-label album, Dream With Me, debuted at No. 2 on the Billboard 200 chart. In 2011, Jackie released another studio album, Heavenly Christmas.

Remembered as queens of the disco era, siblings Debbie, Kim, Joni, and Kathy Sledge, Sister Sledge, formed in Philadelphia in 1971. Symbolizing strong family values, the siblings became global superstars at the height of the disco era. The group is widely known for the anthem, “We Are Family” and other hit songs.

As a unique, multi-faceted, multi-lead-vocal group, any one of the sisters could have chosen to pursue a solo career. Each is an accomplished vocalist, songwriter, producer and performer. Today, Sister Sledge remains in the international spotlight and continues to champion and support the importance and value of family while touring and performing to capacity crowds around the world.

A mellow and recognizable voice like a signature, which resounds in over eighty million records, a tenor voice ranging from Belcanto to Verismo, Andrea Bocelli has been declared everywhere in the world the testimony of the highest Italian vocal tradition. He has always been committed to spreading messages of positivity, hope, and perseverance at a global level, and in supporting social causes in the area of scientific research, fight against poverty, universality of primary education. He is then perceived, everywhere, as a fellow voice that gives voice to the world.

With seven solo albums to his credit and multi-platinum sales of over 16 million copies, Juanes is the world’s leading all-Spanish language rock artist – both a two-time GRAMMY and TWENTY-time LATIN GRAMMY winner with ten #1 singles on the Billboard’s Latin charts. Hailed as “The single most important figure of the past decade in Latin music” (Los Angeles Times), Juanes is also frequently recognized as one of the Spanish-speaking world’s leading social media voices with an online following of 20 million fans.

The Colombian superstar’s dedication as a global activist also extends far beyond his passionate lyrics and is seen in his wide ranging charitable work for his own Mi Sangre Foundation and as a co-founder of the “Paz sin Fronteras” (Peace Without Borders) organization, which utilizes music to unite populaces regardless of political or geographic divides and advocates that all people are entitled to the basic human right of peace.

Prior to the occasion of performing for His Holiness Pope Francis during the World Meeting of Families—Philadelphia 2015, The Philadelphia Orchestra has regularly been called upon to perform on the world’s stage. In 1973, at the request of President Richard Nixon, the Philadelphians became the first American orchestra to perform in China, representing a bridge for cultural, education, and diplomatic exchange between the People’s Republic and the United States; in September 2014, the Orchestra and Music Director Yannick Nézet-Séguin performed on the Occasion of the 69th Session of the United Nations General Assembly in New York; and throughout moments of great triumph and tragedy, has supported the people of Philadelphia with the gift of music.

As an institution that brings communities together through forging partnerships across the Delaware Valley, The Philadelphia Orchestra joined the Dialogue Institute at Temple University to present a series of interfaith dialogues in April 2015, as a means of exploring the nature of Bernstein’s MASS and the questions it raises about religion, faith, and peace. The performances of the massive theater piece, led by Nézet-Séguin, were not only a critical success, but also a profound moment of solidarity.

Since his 2008 major label debut, Maher has become a staple in the artistic and songwriting community. A five time-GRAMMY® nominee, he has garnered multiple radio successes writing and recording songs like “Lord, I Need You,” “Hold Us Together,” “Christ Is Risen,” “All The People Said Amen” and “Your Grace Is Enough.” In 2013, Maher performed on stage with Pope Francis in front of more than 3 million people at World Youth Day in Rio de Janeiro.

Below are all of the artists and groups slated to perform along the Benjamin Franklin Parkway, prior to The Festival of Families: