Philadelphia, PA - There's a line in the movie "Mystic Pizza," where the central characters shout in unison, "And you don't mess with tradition." For 15 years on Wednesday evenings from 5 to 7:00 p.m. (and running June 6th through August 29th), over 90 restaurants have been helping city residents celebrate summer on "Hump Day" with reduced specialty cocktails and drinks along with delish and sumptuous light bites

Popular with crowds who crave summertime fun such as chilling with friends, meet-ups for drinks, people-watching and happily chatting, all while making the most of the outdoors and preferably pleasant weather-wise days and evenings. Those are days I jokingly refer to as "even love my haters" ones. Times like this, it's almost sacrilegious to remain holed up en casa.

But then you know how it goes: there's one in every crowd who must muck with said tradition. I say this with the best intentions. If something works, no harm in building on it or testing some innovative waters. This year's tradition-shattering star happens to be Square 1682 at Hotel Palomar on Sansom Street. 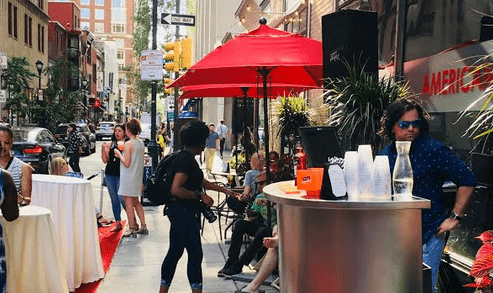 A pop-up bar with a singing bartender (Dan)

To intro this freshie new kid (read: restaurant) on the block, media were invited to explore the festivities. In short, the foodstuffs were exquisite ... all four on the evening's menu were of exceptional quality, flavor, taste and texture. I dawged what were $5 food specials such as bacon-wrapped dates, crispy-crunchy calamari, roasted Brussels sprouts with an aioli drizzled topping and hummus with the best crusty pita-dippers I've ever had. Still salivating here over the appetizers quality and look forward to returning soon. 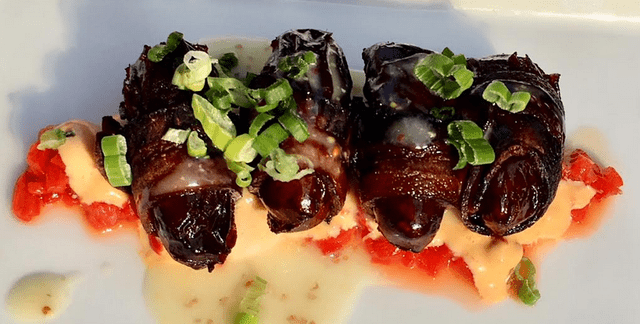 So here's how that "Triple S" (sounds like a horse farm) booze-trifecta names out: Sudz are Peroni beers at $3 a can, Splitz are $10 bubbly bottles, and the Spritz at $9 is an Aperol digestif as well as an aperitif. Also served were house Chards and Cabs at five bucks a pop.

Know what else I witnessed? A pop-up bar with a singing bartender (Dan), who actually could sing. I like someone who can moonlight while working his day job. We were treated to a red carpet, too. I also saw a plastic kiddie pool between two folding chair-seated sippers. Yeah: it was hot that day. But when hasn't it been so far this summer? I viewed plenty more when I could lift my head from piggie-forking with eyes closed in gourmandesque ecstasy. But I'm leaving the rest for y'all to experience yourselves.

Check out Square 1682 and see what these new twisters are up to. Tell you what: if you don't agree, I'll buy you one of those sippy "S's" next we meet!