- As a person who loves food, I have always tried out a variety of ethnic options. Obviously, you don’t know if you like or dislike something unless you give it a chance. Which is how I learned a long time ago of my love of curry.

Situated near Penn’s Landing, Karma has a small storefront that you might miss if you drive too fast. Once inside of the venue, it opens to a cozy atmosphere that has a touch of trendy décor. As for the menu, you can indulge the desire for exotic Indian cuisine. 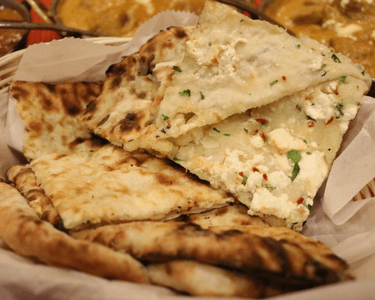 We began with two appetizers; the Chicken 65 and the Shrimp Malabar. The Chicken 65 was fried just long enough for the meat remain juicy while achieving a nice crispy outer layer. What I really liked about this starter dish is the flavor and heat built with each bite; almost like I was trying something new with each crispy and juicy bite. The Shrimp Malabar was spot-on with its description. The shrimp were butterflied open before being basted in coconut and fried to perfection. They were sweet with a little crunch.

Eating Indian food with my hands is normal, and done by using Naan to scoop the curried dishes. So it made sense that we ordered the Assorted Bread Basket (which contains a variety of Naan bread), along with Amritsari Kulcha (Naan stuffed with potatoes, onions, chili, and paneer). Please also note that Karma made their Naan bread a little different than what I usually find in comparable restaurants. Naan is usually more pliable, and these were quite dense and similar to what a loaf of white bread tastes like. So the flavor was excellent, but the texture was not atypical to what I consume in other Indian restaurants.

There are three main dishes we tried, and I will begin with my friend’s favorite. Her preference was on the sweeter side than my own, and so she LOVED the Chicken Xacuti. For me, the sauce was good but leaned heavily on the sweetness scale. This was due to the tamarind and coconut milk used to make the creamy sauce. As for the chicken, each bite was cooked so well that it practically melted in my mouth.

Our middle-ground was the vegetarian-friendly Malai Kofta. That particular dish was like eating light and airy, cheesy meatball enrobed in a slightly sweet and creamy curried sauce. I prefer a savory sauce over a sweet one, but this was delicious.

The Lamb Pasand turned out to be my favorite. Like Goldilocks choosing between the three porridges, I thought the first was too sweet, the second was good, but this one was just right. As with all our other choices, this dish also had a creamy, creamy base. The curried sauce was savory, and all the spices gave it a delicious and robust flavor with some heat. The lamb was tender and had a light ‘gamey’ taste, but I don’t mind that so long as it’s not over-bearing. However, I recommend finishing the Lamb Pasand the day you order it because the next day my leftovers from this were still scrumptious but had a much stronger gamey taste.

Now for the desserts, which we also shared. According to one of the staff members, the Mango Kulfi we ordered was not made by the person who regularly makes it. That said, the one we shared was frozen solid; its texture and taste equated to a frozen Mango Lassi. I wouldn’t mind trying this dessert out again, so long as it was made by the normal staff member.

What gave both of us joy was Karma Delight. Made using Poori (fried flatbread) stuffed with thinly sliced bananas, a scoop of vanilla ice cream on top, and drizzled with chocolate and caramel…this dessert was indeed a delight! I was already full from dinner, but this delicious ending was worth the gastronomic fortitude to eat.