- Philly Chef David Ansill popped up at Bar Amis in the Navy Yard Philadelphia, this August to bring back highlights from his iconic restaurant Pif for one exclusive evening. His first restaurant, whose name comes from a children’s book character beloved by Ansill’s daughter, once featured a seasonal menu that changed monthly, weekly, and even daily, depending on what produce and meats were available and fresh at the market each morning. 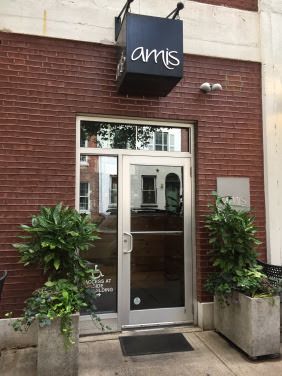 ArmisLast month’s host, Amis is a Vetri family restaurant, whose menu is inspired by quinto quarto aka “the Fifth Quarter, which is a Roman culinary practice that centers on using an animal in its entirety. The restaurant has a seasonal menu with daily specials in addition to periodically hosting guest chefs.

Ansill graduated from The Restaurant School in 1987 and worked in some of Philly’s most notable kitchens (The Bank, Treetops at The Rittenhouse Hotel) before partnering with Stephen Starr to open his first restaurant: The Continental Old City. He left rather quickly for Lucy’s Hat Shop (RIP one of our favorite college stomping grounds). He struck out on his own to open Pif, an extremely successful BYOB in Bella Vista that served ahead-of-its-time French peasant fare that won him a 2004 StarChefs.com Risings Stars Award before closing in 2007. Pif, which once occupied the space at 8th and Carpenter Streets now inhabited by Bibou.

When Pif and Ansill closed, and he laid low at Ladder 15 in 2010 before deciding to move to Jamaica. When he returned, he took over Northern Liberties tapas restaurant Bar Ferdinand, then co-cheffed at Good King Tavern after Paul Lyons’s departure. 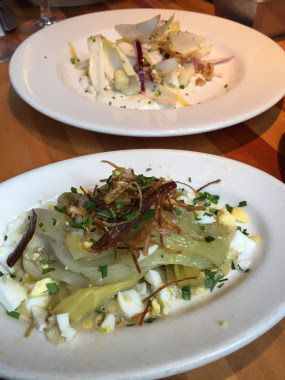 And was back in 2016 opening of Pinefish with bong-smoked oysters, chimmichurri’d whole fish, and sesame-crusted ahi tuna with foie gras. Since leaving Pinefish, Ansill has worked on numerous projects- one of those being his Phif pop-up dinner at Amis. We stopped by on July 25th to for this one-night-only experience.

The restaurant was bustling and our meal began rather quickly with a Endive and Roquefort Salad with apple and walnut, along with Braised Leek with truffled mustard and fine herbs paired with a Squadra Bianco 2016 with hints of golden apple, ripe banana, lemon curd and peach.

The flavors of the wine were light and dry enough to enjoy the taste of each individual dish. As quickly as our dishes arrived they were gone and the second course appeared. 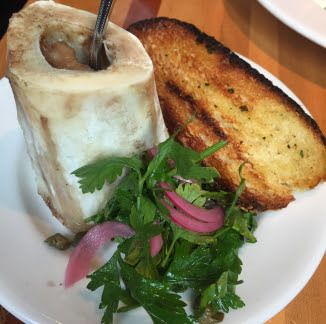 It was our first time trying Bone Marrow with parsley, caper, and red onion. Considered a delicacy in many regions, this dish is often praised for its health benefits. Bone marrow, in broth or in other forms, is a global wellness tool; to support kidney and digestive function and to build blood, build immunity, assist with blood clotting and help provide oxygen to cells, and bone marrow’s collagen can provide nutrition while rebuilding damaged tissues and intestinal lining.

Our favorite dish thus far might have been the Escargot with roasted, whole garlic, and hazelnuts. Nothing beats the flavors in a whole roasted head of garlic paired with a Perrini Negromaro 2015 with notes of red fruit, cherry and spice for an intense flavor.

For the main course, we enjoyed the Braised Leg of Rabbit with bacon and polenta and Skate Frites. This plate with skate wing as a clever play on the classic French bistro dish of Steak Frites. The rabbit was so tender the meat fell right off the bone and the frites gave a nice crunch to the dish. These plates with paired with a Pietranera Le Logge 2011 Supertuscan with a silky and well balanced flavor of cherry and violet. 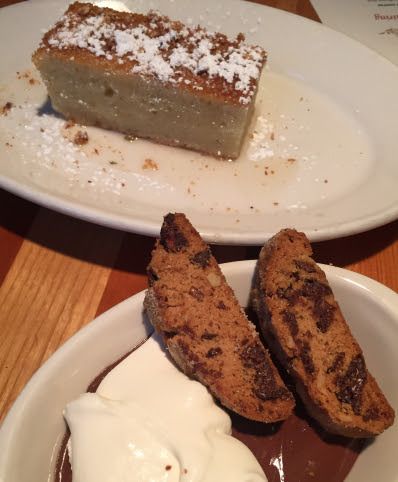 Last but certainly not least, especially in French cuisine, dessert. We had the classic Chocolate Pot de Creme, and Financier Cake with lavender syrup. These plates were accompanied by a sweet Marenco Moscato d’Asti 2016 with hints of yellow stone fruit, citrus zest, herbs and honey. Be sure to keep an eye out for the next pop-up chef’s dinner at Amis, reservations are available via OpenTable.

The semiprivate Platform at Amis located to the left of the front entrance is also available for private parties. The Platform is a small step above the rest of the restaurant creating a feeling of exclusivity while still being able to enjoy the Amis ambiance. And be sure to check out the newly opened Bar Amis which offers the home-style Italian cooking of its namesake in a more casual, approachable way.

Lo Spiedo in the Philadelphia Navy Yard to Reopen as Amis -  Located in The Navy Yard, at Philadelphia’s burgeoning commercial district, Amis will be open for lunch, happy hour and dinner service with weekend brunch to come, making it the perfect place to meet up with family, friends and co-workers. Situated just a short distance from both Lincoln Financial Field and Citizens Bank Park, the restaurant is also the perfect destination for pre-and-post-game revelry. Amis features both an upstairs private dining room and spacious patio area, which can accommodate groups of all sizes.