- National Donut Day is beloved by many people and is recognized by foodies around the world. To celebrate it, Hostess Donettes brought the joy of indulging in their beloved Donettes to a competitive level.

On June 1st, Hostess and Donettes held their inaugural donut-eating competition, sanctioned by Major League Eating (MLE) which was held in the rotunda inside The Shops at Liberty Place in Center City, Philadelphia.

Carmen Cincotti & Joey ChestnutBecky Logan, Brand Director for Breakfast at Hostess Brands, LLC stated, “Powdered Donettes are truly beloved by generations of fans who enjoy them for breakfast, a snack, or dessert. Donut Day or not, this competition marks another exciting milestone in the word of competitive eating, and we salute the competitors’ efforts to set the world record.”

World record achievement or not, once the 6-minute competition was finished, the leftover Donettes in each of the eaters bowls were counted. The powder-covered faces of each eater anxiously waited for those results, as did the massive crowds who gathered to witness the epic Hostess and Donettes contest.

Though the competition was fierce, the #1 ranked competitive eater in the world, Joey “Jaws” Chestnut won the top prize of $4,000 dollars by consuming a total of 257 Donettes. New Jersey resident Carmen Cincotti was the runner-up of the contest, winning $2,000 after eating 244 donettes in the allotted time, and Darron Breeden taking 3rd place after eating 204 Donette. For a list of the full results, click here. 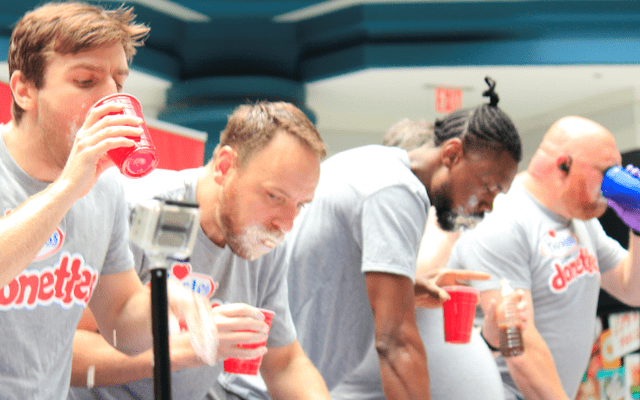 When asked how he felt after winning, Joey Chestnut replied, “I’m glad I got another title eating 257 Donettes, and so happy to celebrate on National Doughnut Day. I feel really good, but I was a little bit worried because last year I did a contest and it was glazed doughnuts and the glazed sugar I didn’t like that much. This one I found a really good rhythm and the powdered sugar was nice. It kind of turned into a frosting when I was drinking the water, and I liked it. It was a really fun contest. It was an easier contest than last year, and the Donettes were going down fast.” 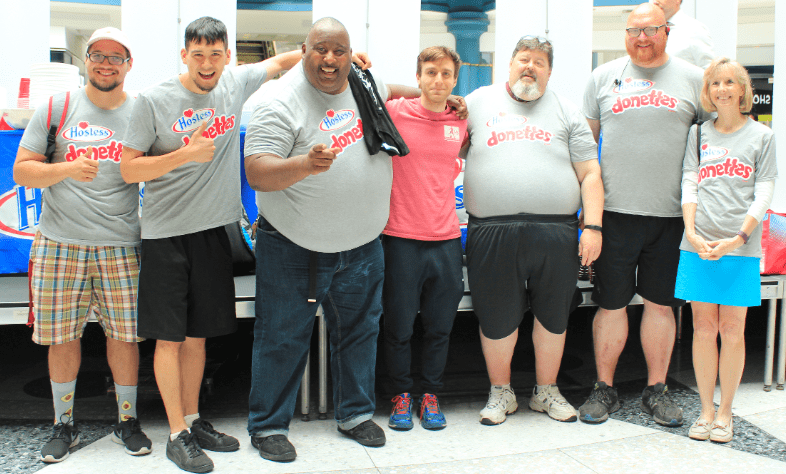 Just as alluring as those powdered snacks were for the competitors to eat, the contest was over, and on-lookers stopped to take pictures with Joey “Jaws” Chestnut with his trophy, and the prized Donettes.

“If there was a snack cake Hall of Fame, Donettes would most certainly have a place near the top as a confectionary superstar as they are America’s #1 donut, according to independent nations sales data,” said Becky Logan.