This chill libation marries a double scoop of Bassetts’ premium vanilla ice cream with a 12-ounce bottle of Hank’s Root Beer and a hearty dollop of the newly created Hank’s Root Beer Float Drizzle, which is, quite literally, a delicious secret sauce created specifically for this signature indulgence.  These ingredients are then blended to a creamy froth and served in a Drizzle-lined 20-ounce walkaway cup.  You can sample this sweet summer treat exclusively at the Bassetts Ice Cream location in downtown The Reading Terminal Market, where Bassetts launched its ice cream empire and has continued to operate, since 1861. 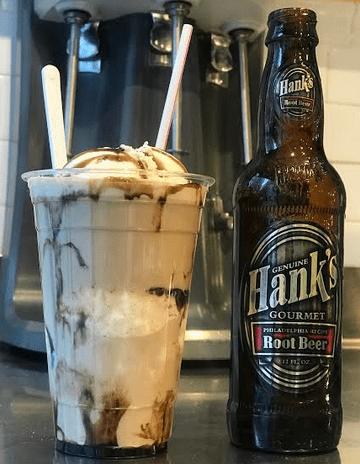 “As Philly’s root beer, we’ve been paired with ice cream in floats for a long, long time. However, in mid-2017, we made a conscious decision to start developing a proprietary line of float drizzles using the classic flavor profiles of our best-selling craft sodas.  We considered partnering with ice cream companies from out-of-state but quickly concluded that Philadelphia is the best test market in America.  It’s where we founded our business, and where we’ll look first from now on to find the right partners to grow our brand,” says Salvatore.