Philadelphia, PA - Chef's Pencil has recently published its most popular ethnic cuisines in America rankings for the entire United States, and Philadelphia ranks in as America's 2nd best city for Chinese food as well as 6th for Italian cuisine.

According to Google Trends, used as the source of data that not only shows Americans' dining out behavior. But it also tracks the foods which Americans are choosing at home. Google offers data on an entire range of topics, such as national cuisines, and allocates a score that suggests the level of interest in the subject. 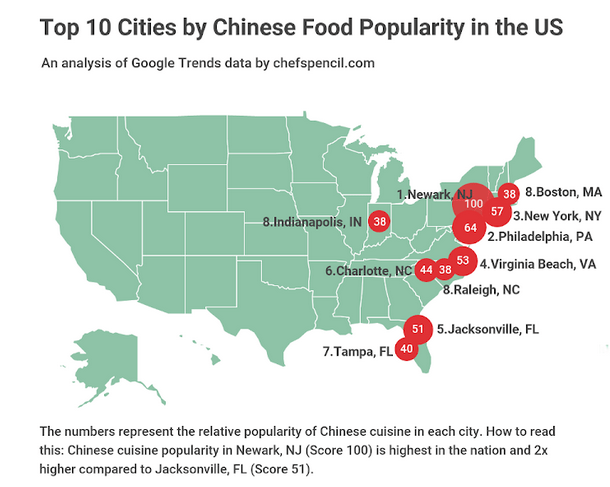 Google subsequently counts precisely how often it's searched in countries, regional areas, towns, and cities related to all local online searches and assigns a popularity score. As an example, if New Jersey scores 100 for Indian cuisine and New York scores 80, it does not imply that more searches happened in New Jersey than in New York; it indicates a higher percentage of people in New Jersey than in New York tend to be into Indian cuisine.

Joy Franklin
Food and Event Writer
My joy is aimed at food and foodie lovers. I enjoy covering trends, issues, and all things Philly

-  Nothing is better than visiting a rundown seafood shack on a hot summer day, and what seafood joints lack in glamour they make up for in food.

- From trendy traditional to high-end steakhouses, Jersey has its share of steakhouses and restaurants to enjoy steak.

South Jersey has its share of great burger shops, from the retro "Pop Shop" to busy counter service and old fashion burger joints.