Cape May, NJ - This quaint eatery, has been in business since 1968, offering New American & Greek fare for breakfast, lunch & dinner. This place an only be described as "great service, great prices, big portions, and good food." located at 301 Beach Ave in Cape May, NJ 08204. 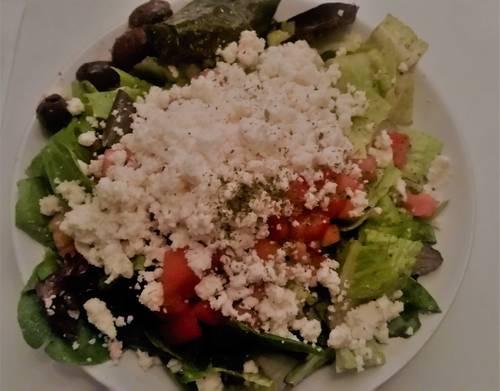 George's Place restaurant is owned by the Kara Restaurant Group family. The group homes to Georges one in Cape May and other one opening in Cape May Court House. George Tsiartsionis first open Georges place in 1968 and has been serving only breakfast and lunch for 34 years. The restaurant was sold back in 2002 to his son-in-law Yanni Karapanagiotis. It was Yanni who felt the need to serve dinner service and added it to the menu. Currently, Yanni along with his brother Peter own four restaurants and it catering company all under the Kara Restaurant Group but George's place in Cape May remains the flagship restaurant for the group.

Georges is a cash-only and BYOB establishment. Reservations however are accepted for dinner starting at 5 p.m. and same day only reservations can be made by calling 609 884-6088. Breakfast and lunch, however, is served daily but reservations are not accepted and parties are seated first come first serve.

The dinner menu includes many Greek options such as a hummus sampler, spanakopita, Falafel crostinis and feta foumo. The main entrees are served with a greek or caesar salad and include such specialties as crab cakes, atlantic salmon, baby greek lamb chops, ribeye, poached cod and roasted pork tenderloin.