Philadelphia, PA - It’s pretty safe to say that things aren’t exactly going to plan for the Philadelphia Eagles this season. The 2018 Super Bowl champs came up short against the New York Giants in their last game, holding them to 13 points but scoring just seven themselves.

The Philadelphia Eagles Only Have Two Main Targets On Offense

They’re now 5-7, which is good enough for third place in the NFC East but clearly not quite good enough. The Eagles are 16/1 to come out on top of the division but it’s a tall task given the current form and PA sports betting sites will reflect as much. They’re favored to win their next game against the New York Jets on Sunday at 5/14.

Their last game sort of typified how Philly’s season is going, more so when the fact that Dallas Goedert was targeted just three times and made a single catch for zero yards revisits memory. Getting the ball to the tight end is always a priority for the Eagles and should be one of the first things that come up in their game plan. But it just did not unfold that way against the Giants.

“It’s whatever,” the 26-year-old said this week. “Obviously, I would like to get 10 targets a game just like any other tight end in the game. 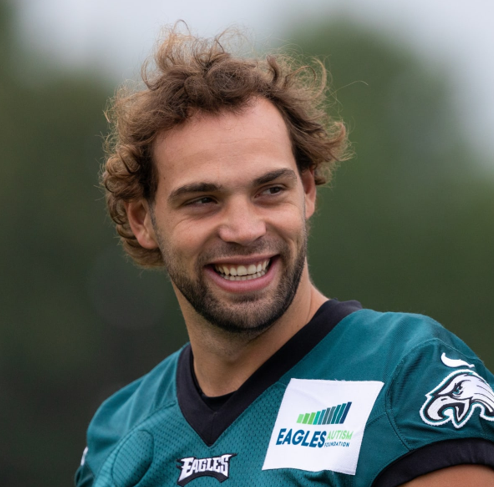 “But I think I make a big impact in the game in more ways than just catching the ball. I think we ran for 200+. If we’re doing that, we should be winning a lot of games. But I’m going to do whatever I can to help the team win and my number wasn’t called in the passing game as much so I did what I could in the run game.”

Of course, he’s right about helping the team in other ways. He’s a pretty good blocker and doesn’t have to be catching consistently to have an impact. However, he’s now one of the highest-paid TEs in the game, making $14 million a season after signing a contract last month, so it stands to reason that blocking shouldn’t be prioritized where he’s concerned, although it should definitely be used.

The Eagles coaching staff has to pick up the blame for this one as they simply didn’t do a good job of involving him in the passing game. Goedert isn’t doing much complaining, though, and did admit that his last target should have been a catch given that it was on the final drive. It wouldn’t have made much of a difference with regards to his stats had he caught it, however.

It doesn’t help that teams know that the Eagles have two main targets in Goedert and DeVonta Smith. They’re going to have problems getting them the ball unless someone else steps up as a proper threat on the offensive side of things. They should have noticed the coverage teams are throwing at their top targets and Goedert himself has pointed out that he is attracting more double teams on third downs.

If all defenses weren’t wise to it yet, they should have seen Goedert and Smith make a combined three catches for a total of 22 yards against New York on Sunday and will be well informed as to how to stop Philadelphia moving forward.

Goedert, though, is taking responsibility.

Speaking after his contract signing in November, the player noted having grown into his role, talking up his ability to also function as a blocker on running plays.

"I've grown into the role and into the league. I was blessed to have this body type. I was blessed to be big, fast, and strong. There's a lot of hard work that goes into it and when it comes to gameday I want to catch the ball and run over the safety,” he said.

“Those guys aren't my friends when it's game day. I want to make them pay because that's the nature of the game. There is a lot that goes into it – playing with leverage, knowing the defense, knowing where Jalen (Hurts) needs me to be. The tight end is a unique position. We have to be half a step into the world of an offensive lineman and half a step into a wide receiver. It's the best of both worlds. We can impact the running game with our blocking and we can impact the passing game by catching the football and scoring touchdowns, and we all love scoring touchdowns."