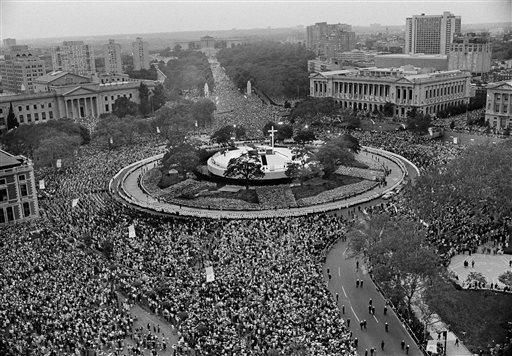 Philadelphia, PA - Philadelphia has had the great honor of seeing two papal visits in the city's history. listed below are details of both Pope John Paul II's visit in 1979 and Pope Francis in 2015. Pope Francis’ Sep 2015 visit to Philadelphia marks the second time the city has hosted a sitting pope.

In October 1979, one million onlookers greeted Pope John Paul II for a mass on the Benjamin Franklin Parkway during his first papal visit to the United States.

He spent 21 hours and 12 minutes in the city and also said a mass for 13,000 priests and nuns at the Philadelphia Civic Center. Later, worshipers lined up before 3:30 a.m. to see the pontiff at St. Peter the Apostle Church, which houses a shrine to St. John Neumann; he also stopped at the Ukrainian Catholic Cathedral of the Immaculate Conception and St. Charles Borromeo Seminary, where 170 seminarians chanted and stomped their feet to welcome him.

A total of two million people saw him, and many banks closed in his honor. One physical landmark remains: a 37-foot cross used in the Center City mass now stands on the grounds of St. Charles Borromeo Seminary.

The World Meeting of Families Conference, the world's largest gathering of Catholic families, will host 100 speakers, panel discussions, workshops and more at the Pennsylvania Convention Center from September 22-25.

Then the citywide Francis Festival takes place over the weekend of September 26-27.

Pope Francis will arrive on Saturday, September 26 and speak at Independence Hall before celebrating at the Festival of Families, a massive free party held on the Benjamin Franklin Parkway.

And on the afternoon of Sunday, September 27, the pope will say a mass for hundreds of thousands of people, also on the Benjamin Franklin Parkway.