- Sometimes there are so many signs pointing in a particular direction that, even if one doesn't believe in signage significance, cause is given to pause.

Mmmm: The Man … Proved Too Much for LA

I am--and this should come as no surprise to anyone who knows me--emotionally intense, so when on Sunday, January 26th, I stepped from a stage at an open mic event after having read several poems and then saw on my phone the tragic news about Kobe Bryant, his beloved Gianna and the seven others who perished in an impactful (on so many levels) chopper crash in Southern California, I struggled to keep my composure rather than bring down the house with an exclamatory reveal. In fact, had I not been struck numb-mum, that is exactly what would have happened. 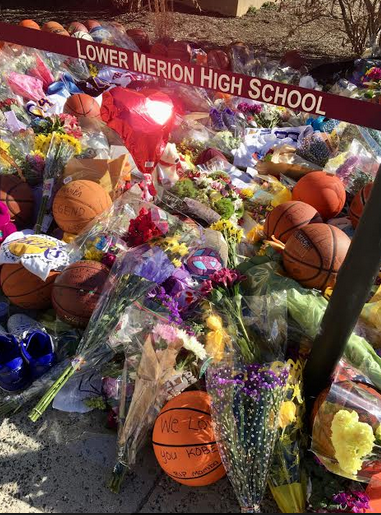 In these ensuing weeks since the world became awash in tributary yellow and purple, I discovered that my then rendered-mute pie hole was the result of shock, the precursor to early-onset grief, wherein the ability to even begin to process such a horrific happening requires a Herculean effort.

I won't lie. Won't even fib. I've been haunted ever since and, even after the Lakers returned to the court after a tribute like none other I've witnessed, my coming-to-terms progress has been sloppy, ebbing and flowing as the memorial services continue. LA's Staples Center will host a public tribute come February 24th.

On the morning I visited Lower Merion High School, Kobe Bean Bryant's alma mater, a hushed pall was palpable among those gathered, as all manner of mementos continued filling the space near the entrance to Bryant Gymnasium.

I don't claim to have any interest in hoops. Can't do a lay-up. Never watch the game. But none of that matters. The incredulity and resultant outpouring of grief, sorrow and mourning comes from another place entirely--the knowledge that we all of us by dint of our humanity have more in common than not, that we (as well as our loved ones) are a momento-mori step away from fate's plucking (moreover, we know it), and that the ultimate lesson (at least for me) hovering over this gone-in-an-instant tragedy is that life is for the living.

My beloved Father died on February 7th, 2019. As I recently struck a match to light the candle in honor of his memory, I realized that this connection so many feel toward Kobe transcends the sport of basketball.

Consequently, the omnipresent advisement to hold closer those who are dear to us, express frequently words and actions which convey our deepest feelings toward them and, if you have a beef with another, make every effort to reconcile things (if it's within your power to do so) before the cold finality of death visits your little sphere.

As we collectively watch so many on the world's court attempt to forge and construct a brave, new Mamba-out existence, we are forced to contend with the notion that the seemingly invincible, those upon whom we confer legend status, the ones who in our minds exist in some untouchable bubble, a rarefied place of entitlement, have no more control over their final breath than we do our own.

LA continues to prove too much for the Man, and it's a beautiful thing to witness the outpouring of emotion and love from so many vastly different individuals, who have been struggling to understand why they, like me, are maybe a bit more affected than expected by this massive loss.

Knowing, really knowing that, whether it is Kobe and Gianna Bryant, the seven other crash victims, you, me, or the errant stink bug in the wrong place at the wrong time, we've all "gotta board the midnight train to go."

We don't get to call the shots on that play.

Sharon is a local writer, covering events and Philadelphia's entertainment and society happenings in and around the city.