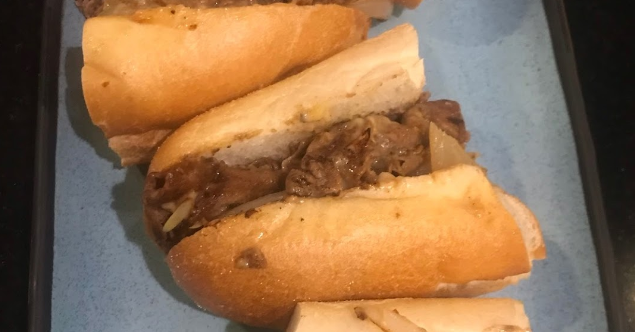 - Philadelphia Cheesesteak Adventure at Gullifty's, 1149 Lancaster Ave, Bryn Mawr, PA. Your cheesesteak will be better than the cheesesteak I had. Scored 90/100.

973rd different cheesesteak in the last four years. Guest Eater Amigo Dan. This was a great stop. Spoiler alert; If you go to Gullifty's, you may be eating the best cheesesteak on the Main Line and possibly the Philadelphia area. When @tbambick (Instagram) first told me about Gullifty's, I was afraid it would be a college bar.

I was happy to find out it is a family-owned and operated place disguised as a power lunch bar/restaurant. After you enter, you have to go downstairs, which I think is very cool/shady/cosmopolitan.

Jason, the owner, stopped by and asked how we liked the cheesesteak. I was going to be my usual self and tell him I liked it and then go home and rip the cheesesteak online. But, I put on my big boy pants and told him I thought the meat was chopped too finely, and it was drowning in the amazing Gullifty's made beer cheese sauce.

We had a little side cup of cheese sauce for our taste test. After our uncomfortable (being dramatic, another of my manly traits) conversation, Jason reappeared with a cheesesteak that had half slightly chopped meat and half unchopped meat. Both halves had a little less amazing Gullifty's made beer cheese sauce. After a quick taste test, Jason will serve his cheesesteaks with slightly chopped meat with a touch less Gullifty's made beer cheese sauce. I don't know if he is going to always do that.